A FRESCO BY TELMO MIEL IN BOULOGNE-SUR-MER

The street art project of the city of Boulogne-sur-Mer

The city of Boulogne-sur-Mer continues to reflect on its heritage while continuing to develop the concept of a city of art and history. Rethinking / Reflecting on the visual identity is essential to develop the positive imagination around the city as a place of art and history, but also a possibility for the visitor who passes there, the foreigner who lives there or the Boulonnais which was born there an itinerary of urban art course.
This change of visual will help to project the Boulonnais towards a more dynamic image where artistic creation will find its place in the participation of the inhabitants.
Their challenge today is to generate a real “living together” and a sense of collective belonging to our city. For this, the city of Boulogne-sur-Mer is convinced that the arts and culture have an important role to play in building an identity and an image (at regional, national and international level). The city counts this creative force to question the values ​​of the city and more broadly of society. Because artists have the power to change our outlook, to make us think about our choices and our future.

The common kestrel is part of the Falconidae family and more specifically that of diurnal raptors. Found throughout Eurasia and much of northern Africa, it is between 32 and 35 centimeters in length, and between 68 and 78 centimeters in wingspan. Its plumage is characterized by a red back with brown spots, however with differences between males and females. Its narrow wings are brown at their tips. Her belly, on the other hand, is lighter with darker stripes and spots. Its song is rather rare, however we observe a great variety of tones.
The common kestrel is a sedentary bird that adapts to different types of environments, mainly feeding on small mammals such as rodents. To catch its prey, it moves in a hovering flight called “flight in the Holy Spirit” and lets itself slide towards its prey.
Unfortunately, this species is threatened by chemicals used in agriculture which impoverish the land leading to a decrease in the quality and quantity of food. Despite its status as a “fully protected species”, the population of kestrels in France declined by 20% between 2001 and 2018. Without a change in the land use systems, the demography of the species will continue to decline. 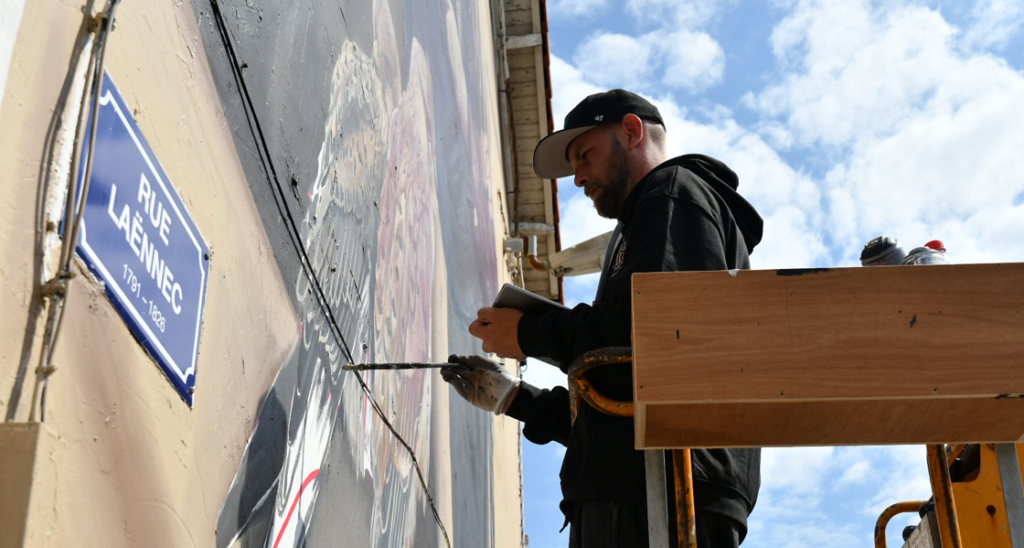 Telmo Pieper and Miel Krutzmann are two Dutch street artists who form a duo known as Telmo Miel. The two artists met during their studies in 2007 in Rotterdam, but it was only in 2012 that they founded their company “TelmoMiel”. Together today, they create hyper-realistic works in the form of life-size murals and facades on walls around the world. By assembling their styles and skills, the duo superimposes realistic representations for a rendering as dreamlike as surreal.
Miel Krutzmann explains that the idea behind their creations “is to offer a certain look at the relationship between man and nature”
For this fresco, integrating the project “Les Murs d’Audubon”, the artists wanted to stage the kestrel accompanied by a female figure: “Here, we discover a standing person who crosses his arms in a waiting posture. a little closed. At the same time, she is holding a stick on which are placed two protected birds, kestrels. These two postures symbolize the different approach that man can show towards nature, his respect and his will to protect it. “
“Often, when people discover a work, they are obsessed with the eyes,” continues Miel. “He looks for who the character looks like and forgets the rest. But, we don’t care. This person is universal. She could be anyone. This work is a comprehensive approach on an important theme: respect for nature and protection of the environment. “
This work, both graphic and philosophical, can be discovered at 84 rue du Chemin Vert, Boulogne-sur-Mer, France.

Read more about the kestrel