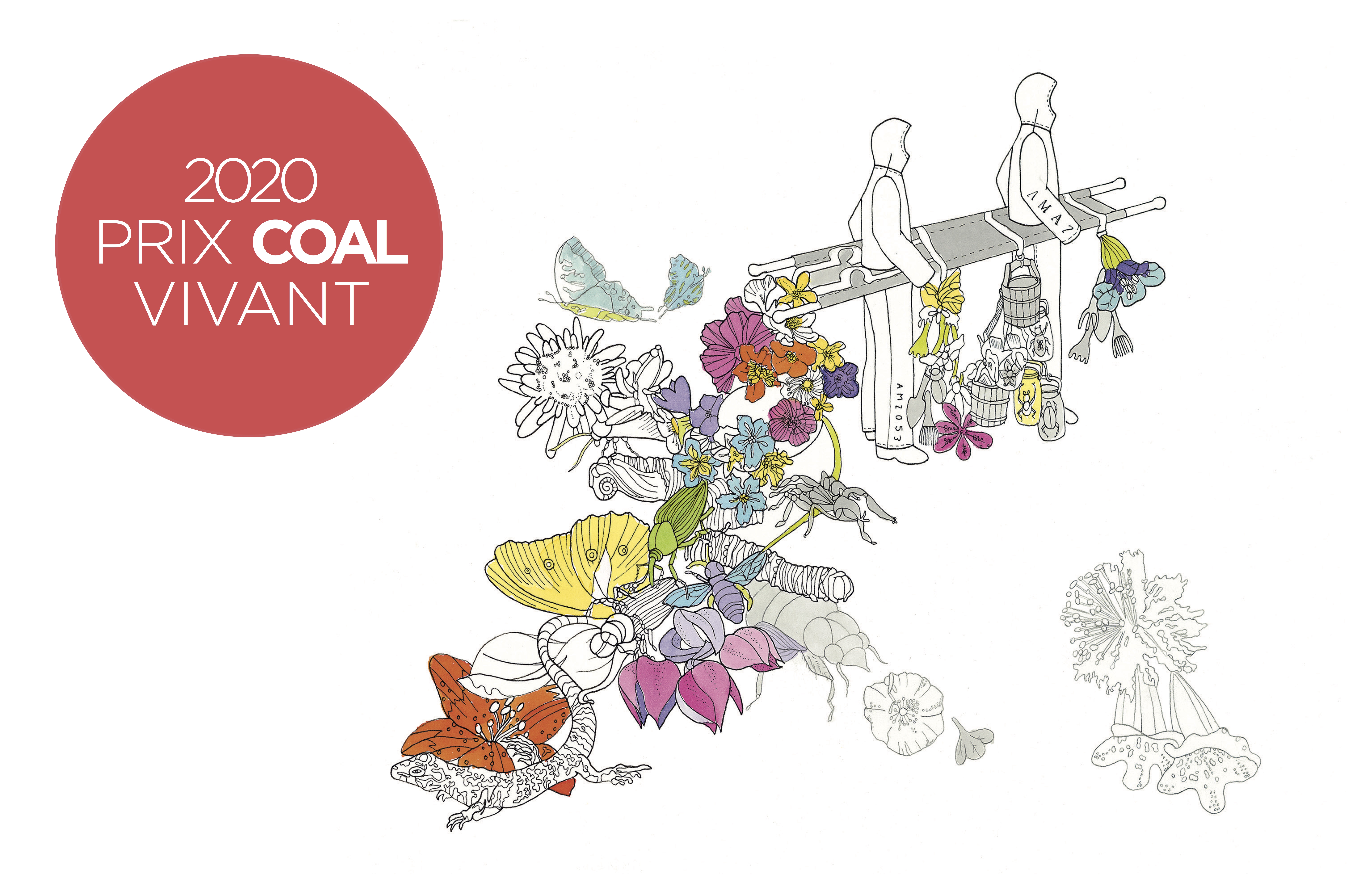 In 2020, the COAL Prize is devoted to the erosion of biodiversity. This eleventh edition is part of the program VIVANT, a cultural Season for Biodiversity carried by COAL and its partners in preparation for the IUCN World Conservation Congress 2020 (International Union for the Conservation of Nature) to be held in Marseille from the 11th to the 19th of June, and in anticipation of the 15th Conference of the Parties (COP) to the Convention on Biological Diversity (China, October 2020).

The sixth mass extinction that threatens the diversity of life affects both species and ecosystems. In France, at present, 18% of species, or nearly one in five species, are already considered extinct or threatened. The last similar crisis dates to 65 million years ago and sealed the fate of the dinosaurs. Unlike the previous five, this sixth extinction of the living is due to the impact of human activity. Five major causes have been identified: the changed use of natural areas, overexploitation of species, pollution, climate change and invasive alien species. A response from governments, the private sector, representatives of civil society and citizens is urgently needed to cease the decline of life’s diversity.

Stop the global crisis of plastic pollution, reduce the impact of human activities at sea and on land, adapt to climate change, fight against deforestation, protect rivers, marshes, grasslands and coastal mangroves, strenghten the protection measures for great apes, marine mammals and counter the organized trafficking of wild species. The heterogeneity and interweaving of biodiversity protection issues requires a wide range of actions – regulation, prevention, adaptation and implementation of nature-based solutions. Transformative changes in our societies are needed to restore and preserve nature.

By facing a situation as complex as it is urgent, the 2020 COAL Prize invites artists from all over the world to rally in order to report on a world that is still alive, to feel and experience biodiversity, but mostly to act and get involved with nature protection actors.

Presented and awarded at the IUCN World Conservation Congress 2020 in Marseille in June 2020, the COAL Prize will contribute to the decisive step towards accelerating French and international public policies and raising citizens’ awareness of the need to preserve the environment and its biodiversity.

Created in 2010 by COAL association, the COAL Prize has in ten years become a vehicle for the identification, promotion and dissemination of artists all around the world who dare to imagine and experiment, to transform territories, lifestyles, organizations and production methods. Together, they contribute to making changes visible, in building a new collective narrative, a new imaginary world, a common heritage, a positive, optimistic and necessary framework, to let everyone find the means and the motivation to implement necessary changes for a shared and livable Earth.

Application deadline: 1st March 2020
Announcement of shortlisted artists: spring 2020
Award ceremony: June 2020, during the IUCN World  Conservation Congress 2020 in Marseille.
Exhibition of the shortlisted projects: the COAL Prize 2020 nominees will be presented at the IUCN World Conservation Congress 2020, in Marseille in June 2020, in the Nature Generation Areas, showcasing the mobilization and action of all those involved in the fight against the erosion of biodiversity.

The winner of the COAL Prize will receive an award of 10,000 euros and an (optional) residency with additional financial support for artistic production at the Belval estate (Ardennes), property of the François Sommer Foundation.

The François Sommer Foundation was founded in 1966 by François and Jacqueline Sommer, pioneers of the implementation of a humanist ecology. Faithful to the commitments of its founders, it works for the respectful use of the resources of nature, the sharing of wealth of the natural, artistic and cultural heritage for the protection of a biodiversity in which mankind find its proper place.

The Belval estate is located in the commune of Belval-Bois-des-Dames. With an enclosed area of ​​600 hectares, it is essentially a forested area covered in meadows and 40 hectares of ponds. A veritable observatory of rural life and wildlife, each year it welcomes selected artists who contribute to the representation of their vision of Man’s relationship to his natural environment. Testament to the Foundation’s commitment in supporting contemporary artistic creation, the residency at the Belval estate contributes to the dissemination of the artists’ works to a wide audience. The combined knowledge of the scientific and educational teams of the Museum of Hunting and Nature and those of the Belval estate will also be available as a resource for the artists. We invite you to consult its charter on COAL website.

Each year the ten projects are shortlisted by a committee of professionals among the projects received through the international open call.
The winning project will be chosen by a jury composed of representatives of partner organizations of the 2020 COAL Prize and personalities of art and ecology. In 2020, an additional prize will also be awarded by the public of the Nature Generation Areas, spaces led by the Ministry of Ecology and the French Agency for Biodiversity, in the context of the IUCN World Conservation Congress 2020.
In addition, all applications considered by COAL and the selection committee will become part of a network of artists and projects may can be solicited or promoted for opportunities and actions carried out by COAL and its partners.

Applicants will be judged on the following criteria: artistic value, relevance (understanding of the theme – VIVANT (Biodiveristy)), originality (the ability to introduce new approaches, themes, and points of view), pedagogy (ability to get a message across and raise awareness), social and participative approaches (engagement, testimony, efficiency, societal dynamics), eco-design and feasibility.
The COAL Prize supports artistic projects in progress. Its award is not intended to cover all production costs of the project but should be considered as an aid to its development.

The application should include the following documents in a single PDF saved as SURNAME_Name_2020_Project-title, and not exceeding 30 Mb:

– A detailed description of the proposed project, describing its artistic dimension, its relevance to the theme VIVANT and including a note on the technical feasibility of the project and a budget estimation

– A CV and a portfolio

All applications are to be submitted before March 1st, 2020 via the COAL server : upload.projetcoal.org

By entering this competition, applicants expressly authorize the COAL organization and its partners to publish, reproduce and display in public all or part of the elements of their entry for any purpose linked to the promotion and communication of COAL and its partners, via all platforms and media, in all countries, for the legal duration of the copyright. Entries submitted but not selected will remain in the archives of the COAL organization. They will, however, remain the property of their authors. Participation in this open call entails the full acceptance of these conditions.

The COAL Prize is supported by the Ministry of Ecology, the Ministry of Culture, the European Union, through the ACT network, the French Agency for Biodiversity, the Musée de la Chasse et de la Nature and the François Sommer Foundation and is in partnership with the IUCN French Committee, the Natural Reserves of France, the Federation of Regional Natural Parks of France, the WWF, the French Southern Region, the city of Marseille and the Parc national des Calanques and all the partners of VIVANT.

COAL, an association created in France in 2008 by professionals of contemporary art, ecology and research, has become the leading French actor in the expanding crossover between art and ecology, most notabaly through the COAL Prize, international cooperation actions and more than fifty exhibitions and territorial cultural projects.

In 2020, COAL is launching VIVANT, a cultural Season for Biodiversity, taking place between March and October 2020 in conjunction with the next IUCN World Conservation Congress, to raise awareness and rally political action on biodiversity issues.